Cursed to roam an untamed west as a vampire, Ezekiel Carson, once a devoted man of God, is…

Cursed to roam an untamed west as a vampire, Ezekiel Carson, once a devoted man of God, is haunted by his past. Feeding on bandits and spending his nights satisfying his endless lusts, he has found his life empty. William Hamilton is a school teacher from New York who is in need of a guide and seeks out The Blood Rider. Their meeting is less than promising, but Ezekiel agrees to help after learning William is searching for his brother, a preacher who has disappeared from a mining town in New Mexico.

Riding only at night and drinking from blood-filled canteens, the journey begins. When William discovers the man in black’s secret, he is weary, but, desperate to find his brother, they travel on. After arriving, the two discover the prosperous mining town holds a dark secret. The burned down church on the outskirts of town, missing miners and whispers of demons are just the beginning. The moon is high, the sky is clear and the scent of death lingers in the air.

Tales of the Dead Walker 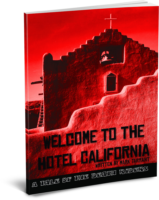 Welcome to the Hotel California

Welcome to the Hotel California was last modified: 2015-12-27T20:35 by lisa@helpmelisa.com
Tales of the Dead Walker 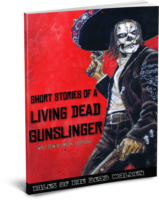 Short Stories of a Living Dead GunslInger was last modified: 2015-12-27T20:22 by lisa@helpmelisa.com

This site is protected by Comment SPAM Wiper.
0 0items

Your shopping cart is empty.